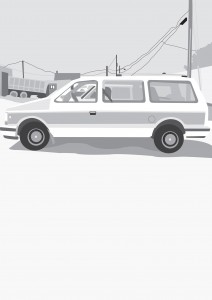 The Black Keys returned to their home state of Ohio last Tuesday to perform at the Quicken Loans Arena in Cleveland.

Being a moderate fan of The Black Keys, I did not know what to expect attending this concert.  However, this was one of the best concerts I’ve been to in quite some time.  In fact, The Black Keys now have a No. 1 fan.

For those of you who may not know of The Black Keys, they are one of Akron’s own treasures.  The band is comprised of two members: guitarist and vocalist Dan Auerbach and drummer Patrick Carney.  Both Carney and Auerbach were born and raised right here in Akron, Ohio, and both attended The University of Akron.  They formed The Black Keys in 2001 with their career taking a giant leap into the music world with their song “Tighten Up,” which won a Grammy Award in 2010.

This highly-anticipated concert opened with the Arctic Monkeys.

During the opening band, I was concerned that the Quicken Loans Arena was going to be empty for this phenomenal band, but by the time The Black Keys took the stage, the entire stadium was packed.  They opened with several of their hit songs from their new album, “El Camino.”  These songs included a personal favorite called “Gold on the Ceiling,” which is the feature song of the NCAA March Madness Tournament.

The Black Keys are truly something for Akron to be proud of.  Since 2010, they have had their songs featured in several movies, won a Grammy Award, as well as been the featured musician for the NCAA Men’s Basketball music performers for the 2011 season.  Their album “Brothers” was featured in Rolling Stone Magazine’s “Best Albums of 2010” the No. 2 spot.

Since the band only has two members, The Black Keys featured several upstarts to accompany them on stage at various times throughout their performance.  This makes for an interesting experience every single time you attend a new concert.

If you were unable to attend The Black Keys concert this last week, do not worry. It is almost a certainty these Akron, Ohio, grown stars of ours will return again someday in the near future.