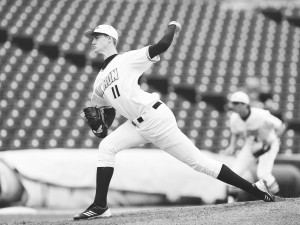 The Zips baseball team went 2-1 against the Ball State University Cardinals in their Mid-American Conference (MAC) debut of the season.

In their home opener, the Zips defeated the Cardinals in a nine-inning 4-0 shut-out.

The Zips put the first runs on the board in the bottom of the fourth inning. First baseman Sam Trecaso led the team off with a single down the left field line.  Outfielder Kurt Gamby followed up with a double down the left field line, putting Trecaso in scoring position. Infielder Brandon Winter grounded out to shortstop, earning the RBI with Trecaso putting the first run on the board.

The team kept the momentum going in the fifth inning with outfielder Devan Ahart starting the rally with a single to the right side. Infielder Tyler Begun smashed a triple to deep left center, putting Ahart across the plate. Third baseman Sam Watkins followed up with a single to the left side earning an RBI. Trecaso continued the hits with a triple to right center.

The Zips finished the contest with nine hits.

On Saturday, Akron faced the Cardinals again at Canal Park.

Freshman right-hander Dan Becks closed the last two innings of the match, facing 10 batters and allowing three runs to be put on the board.

Begun and Trecaso got the sticks going with a pair of singles in the bottom of the sixth inning. Gamby, Stewart, Burant, right fielder Darius Washington and second baseman Matt Rembielak all had consecutive base hits, tallying seven hits for the inning and scoring six runs.

Ball State fought back in the top of the ninth inning, scoring three runs on one walk and three hits.

“I’m really proud of how the team’s coming together and taking advantage of our opportunities,” said Washington, who is batting .343 for the season, has hit two homeruns and has nine RBIs.

In the third matchup of their MAC opener, with an almost 20 degree drop in temperature and winds blowing in from left field, Akron went a marathon 12 innings against BSU.

Ball State scored their first run in the top of the third inning with a single to the right side and a sacrifice bunt.

Akron would not counter that run until the bottom of the ninth.

Catcher Brady Stewart started things off with a single down the right field line. Washington reached first base on a fielder’s choice to the shortstop, putting pinch runner Jared Turocy in scoring position. Rembielak laid down a bunt down the first base line, earning the RBI.

In the top of the 12th inning, BSU put another run on the board, making the score 2-1.

The Zips stranded the tying run on second base, giving the Cardinals their only win of the series.

Akron goes into two midweek games against the Youngstown State Penguins with an overall record of 8-14.

The home game of the matchup will be played at Canal Park on Wednesday at 3 p.m..