“It was different; it wasn’t anything I expected,” said Iyeshia Hood, a UA sophomore, after the show.
Students at The University of Akron modeled the latest trends in fashion, ranging from color blocking to bold prints. The Iota Phi Theta Fraternity collaborated with Purple Plane Clothing Co. and other fashion designers to create an event for students interested in fashion.
According to Ricardo Parker, a senior and member of Iota Phi Theta Fraternity, Inc., the event was off to a late start this semester. Parker further noted that the event turned out to be a success with live entertainment from local comedians and musicians.

“I like the fact that they got locals out and gave them a chance,” Hood said.

The student models showed off their hard work by walking the runway fiercely with confidence and attitude. Both male and female students wore styles that were classy, colorful, urban and retro.
“We had a lot of girls that did the show in previous years that actually came in during the beginning stages of it and helped some of the girls walk,” Parker said. “They came in and just showed them different kinds of poses.”
The Iota Phi Theta Fraternity, Inc. starts preparing for the fashion show every spring semester between Jan. and Feb. The commitment challenges students to balance their involvements on campus with their schoolw 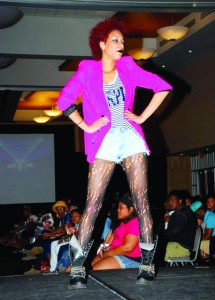 ork.
This was her first time being a part of an event on campus and modeling. Her favorite scene modeling in was the “Off The Wall No Holds Bar,” scene where she wore a classic black blazer with denim shorts, combat boots and black lace thigh-highs. She also modeled designs from Purple Plane Clothing Co.
Purple Plane’s clothing line was displayed in the “City Trends” scene of the show. Fashions included signature camouflage and cheetah prints, varsity jackets showing logos of the line, along with acid wash denim vests and jeans. The edgy street-wear was different, but nevertheless a fashion statement that opened the eyes to audience members.

“It’s a movement,” said Tru’Maine Neal, founder and owner of Purple Plane Clothing Co.
Students representing the sororities and fraternities of Alpha Phi, Delta Gamma, Alpha Delta Pi and Lambda Chi Alpha walked the runaway in custom clothing.
“It was really out of the box,” Hood said. “They were all different shapes and sizes, which provided more variety.”