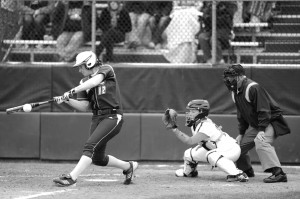 The Lady Zips softball team dropped four games over the weekend in matchups against Toledo and Bowling Green.

Game one started out as a pitcher’s duel, with neither team scoring a run until the sixth inning.  After giving up a single in the first inning, Brittany Mauer retired 12 straight batters.  In the sixth, the Rockets posted the first two runs of the game, making the score 2-0.

In the bottom of the sixth, Mauer got the first hit of the game for the Zips on a two-out single, but would be stranded at first to end the inning.

The Rockets broke it open in the top of the seventh by producing eight straight hits and six runs to make the final score 8-0.

In game two, the Zips scored first when Mauer came across on a sacrifice fly by Alissa Birkhimer .

In the top of the second, the Rockets came back with a seven-run inning with the help of three errors committed by the Zips, making the mark 7-1.

The Zips responded after a walk by Allison Dorr. Iesha Mountain came in to pinch run and stole second and advanced to third on a wild pitch. She later scored on a single by Kellie Roudabush, making the score 7-2 after two.

The Zips took another chunk off the Rocket’s lead in the bottom of the fourth. Rachael Ratcliffe and Dorr both singled. Amanda Ricker, who pinch ran for Ratcliffe, scored on a double by Roudabush, while Dorr was thrown out at home. Roudabush would advance to third on the throw and later scored on a passed ball.

In the top of the seventh, the Rockets increased their lead to 12-4 with a three-run homerun, a sacrifice fly and an error committed by the Zips.

The Zips would not go away, though. A comeback rally fell short after Birkhimer hit a three-run homerun with two outs in the bottom of the seventh, making the final score 12-7.

Mauer was credited with both losses, making her season record 10-13. Offensively, the Zips were led by Roudabush, going 2-5 with two RBI’s and a double, and Birkhimer, who produced four RBIs with a homerun.

With two outs in the top of the sixth, Bowling Green brought in the first run of the game by either team on a two-out single. They then went on to rally for two more runs in that inning and added an insurance run in the top of the seventh.

“The bottom line is we have to give her [Mauer] run support,” Jones said of the team struggling to get runners across the plate.

In the top of the first, the Falcons went up 4-0 after a grand slam. A pitching change was made by the Zips after the first three Falcons reached base. Mauer replaced Lisa Lash in the circle, then gave up the homerun against the first batter she faced.

Roudabush stole home in the bottom of the second to make the score 4-1, but the Falcons responded in the top of the third with a pair of runs to post a 6-1 score.

Kinis Tellep would come to the circle in the top of the fourth and do solid work by allowing just one run, striking out five and walking two.

The Zips would score a run in the bottom of the fourth and fifth to cut the lead to 6-3. Bowling Green scored the eventual deciding run in the top of the sixth, making the mark 7-3.

In the bottom of the sixth, the Zips scored three runs on five hits to pull the game within one run. With one out and two runners on base, Crystal Hernandez singled to score Roudabush and moved Cassie Gleisner to third.

Mountain came in to pinch run for Hernandez and stole second. Keelia Nester walked, and Mauer singled to score Gleisner and Mountain.

Nester was tagged out at home on an attempted double-steal for the second out.  Mauer advanced to second on the play and moved to third on a single by Alex Helfrich. Birhimer struck out swinging to end the inning.

Dorr singled in the top of the seventh but was stranded when Roudabush and Gleisner struck out and Taryn Allmon grounded out to end the game.

Jones said that the team needs to “execute our game.” According to Jones, the 12 hits in the game were a big improvement over the rest of the weekend.

The Zips will play Niagra in a doubleheader Tuesday at Lee R. Jackson Softball Field at 3 p.m. The team will continue MAC play on Friday when the travel to Oxford, Ohio, to take on the Miami RedHawks.