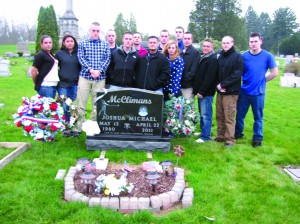 Seniors in The University of Akron’s Army ROTC took their yearly weekend getaway to Gettysburg, Pa., this past weekend.

As it is every year, the trip was a requirement for these senior cadets to graduate and commission as second lieutenants in May. The trip is one of the last things required of seniors and is a culminating event in the life of each cadet.

“The Gettysburg trip was a blatant reminder of why each of us is here to serve, reminding us of our patriotism amid our hectic lives and an honor to pay respects to those who served before us and laid down their lives for us to be free today,” said sociology major Tiffany Kleines.

The cadets left early Friday morning and began their six-hour trip to Pa. Along the way, they met Kent State, Youngstown State and Mount Union cadets to complete the convoy on their way to the famous battle grounds.

However, they made a half stop at Denny’s Beer Barrel Pub, Home of the World’s Largest Hamburger Challenges. Though no cadets accepted a challenge, a Youngstown State cadre member did attempt to eat a challenge burger, to no avail.

Once cadets arrived in the historic town of Gettysburg, they made their way to the Eisenhower Hotel a couple miles outside of the downtown area.  There they checked into their rooms and made their way to a conference room to socialize and enjoy pizza from a local mom and pop shop.

Periodically, they would exit the vehicles to take a closer look at the areas and take pictures. The entire area of battle fields is adorned with monuments, statues, sculptures and plaques marking pivotal parts in the battle and important people involved.

“I really liked the story behind each statue and how each one represented a person,” said political science major Dakota Willener. “It showed that those soldiers had families and more was happening in the battles than just marching in a picket line.”

After the tour, cadets were given the opportunity to spend the rest of the day to explore the historic downtown area.  With museums, antique shops, wineries and cigar bars, unique eateries and historic buildings still featuring bullet holes from the war, downtown offered plenty to entertain cadets.  To end the second day, everyone gathered at General Pickett’s Buffet to have the benefit of an authentic country cooked meal.

The third day would take the cadets to the Civil War museums, which included a bona fide cyclorama. The cyclorama is a 22foot high and 279-foot in circumference circular oil painting depicting the battle of Gettysburg, complete with sound effects and lights depicting artillery and gunfire. Other parts of the museums included an extensive number of artifacts from the Civil War specific to Gettysburg.

After departing from Gettysburg, UA cadets and cadre made a detour to Jamestown, Ohio. Here, they commemorated the life of Captain Joshua M. McClimans, Akron alumnus who was killed in Afghanistan last year. There, they placed a wreath by his grave and took a moment to reflect on his sacrifice.

Captain McClimans graduated from The University of Akron and commissioned from the ROTC program in 2003.