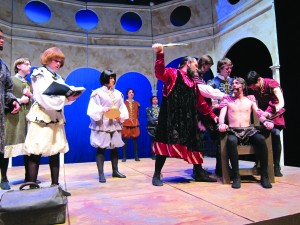 The University of Akron’s Department of English hosted the 14th annual “Shakespeare in the Spring” celebration last Thursday at the Martin Center.

Those in attendance at this year’s event were able to see two acts of The University of Akron’s production of Shakespeare’s “The Merchant of Venice,” directed by Aubrey Caldwell, M.F.A, School of Dance, Theatre and Arts Administration

The scenes depicted both elements of high drama within the play, along with light-hearted humor, moving from the famous scene of the cutting of a pound of flesh for payment to a humorous squabble between witty wives and their husbands.

Director Aubrey Caldwell expressed the anti-Semitism that is present throughout the play and the importance of the play’s message in society.

“The performance section and the lecture came together for a more productive conversation for both “Othello” and “The Merchant of Venice,” said festival co-chair Dr. Hilary Nunn.

Following a 15 minute intermission after the performance, the lecture aspect of the event began.  This year’s speaker was Carol Mejia-LaPerle, Ph.D., from the Department of English at Wright State University in Dayton, Ohio.

LaPerle’s lecture was titled Global Adaptations of Shakespeare’s “Othello.” The annual lecture was attended by both faculty and students at UA, and included a question and answer portion after the conclusion of LaPerle’s presentation.

The final formal portion of the event before the birthday party was the Shakespeare Essay Prize Contest Awards Ceremony.

Each year, several research papers written by students at UA are chosen for cash prizes. The graduate student first prize winner for this year was Marlia Fontame-Weisse. The undergraduate prize went to Nick Nussen.

Concluding with a birthday cake wishing the famous bard a happy birthday, the 14th annual Shakespeare in the Spring Festival came to an end.

Nunn was pleased with this year’s event.

“It was fantastic to see how excited the students were about the ideas introduced in both sections,” she said.