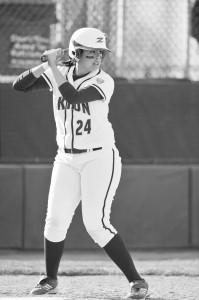 The Zips grabbed the lead in the bottom of the first on a sacrifice fly by Allison Dorr to score Alex Helfrich, who had singled then stole second and third.

In the top of the second, Niagara tied the game at 1-1 with a solo home run. The Zips responded with their own home run. It was Taryn Allmon’s first for the season.

To lead off the bottom of the third, Alissa Birkhimer hit her fifth home run of the season to make the score 3-1. Five batters later, Crystal Hernandez homered for the first time with two on base to make the mark 6-1.

The Zips extended their lead in the bottom of the fourth. Rachael Ratcliffe hit a three-run home run, the fourth hit by the Zips in the game. With the bases loaded, the Zips scored two more runs on an error and a wild pitch committed by the Purple Eagles.

Brittany Mauer earned her 11th win of the season by giving up only one run and striking out three in the five innings of work.

In game two, the Zips scored early by posting a run in the bottom of the first off a groundout by Kellie Roudabush to score Mauer with the bases loaded.

UA added to their lead in the bottom of the second thanks to a hustle play by Keelia Nester. Nester reached first on a dropped third strike with two outs to extend the inning. With the bases loaded after two singles, two runs scored on a double by Birkhimer.  Helfrich was thrown out at the plate to end the inning.

With the Zips up 3-0, Akron extended its lead again in the bottom of the fifth. Hernandez drove in two runs on a single with two outs to make the score 5-0.

Kinsi Tellep earned her first win of the season from the circle with a seven-inning shutout.  She also posted 10 strikeouts, one walk and only gave up two hits.

The Zips seemed to overcome the hitting woes that troubled them this past weekend. In the pair of games against Niagara, the Zips posted 21 hits and 17 runs.

“Today was finally where we put three things together: we played good defense overall, we pitched well and we finally hit the ball,” said Akron Head Coach Julie Jones.

After a disappointing weekend, Jones said the team needed to give the pitching staff more run support.

“They can hit and I know that they can hit, so it was nice to see them come out today…and put it all together,” Jones said.

The Zips will continue MAC play this weekend when they travel to Oxford, Ohio, to take on the Miami RedHawks on Friday. Game one of the doubleheader begins at 1 p.m.