University of Akron student Sara Mahri, 21, is a 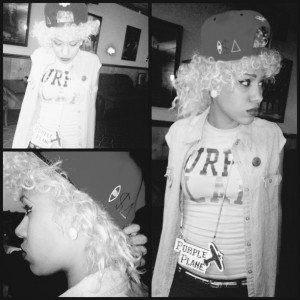 Mahri started modeling for Purple Plane last year and has been a loyal model and friend to the new business.

“I always wanted to model,” she said. “I love fashion.”

With a passion for dancing, Mahri took her chances at modeling and added the experience to her list of skills. Going to school, dancing and working at Next clothing store keeps her busy.

When she first found out about Purple Plane through a friend of hers, she could not explore the opportunity at the time. It wasn’t until later that her schedule allowed her to try modeling for Purple Plane.

“As soon as she hit the photo shoot, it was over,” said Tylon Allen, co-founder of Purple Plane.

Allen said that he knew after her first shot was taken that Mahri was the face of Purple Plane.

Tru’Maine Neal, founder of Purple Plane, gave a speech to all the models before the photo shoot took place which changed Mahri’s perspective. The passion Neal had about his new business connected with Mahri and the other models.

“I knew what he was doing was from the heart,” Mahri said.

Within weeks of working with Purple Plane, Mahri felt that their team was turning into a second family. Already knowing a couple of the other models, she made more friends and gained a personal appreciation for the business and founders.

“Working with them has opened a lot of doors for me,” said Mahri. “It brought a lot of attention to me and what I do and it brought attention to my skills in modeling. Networking has been the greatest.”

Though their business has hit some roadblocks with the loss of half of their models, Mahri remained. Some of the models relocated and moved out of state, leaving Mahari and a few other models who remain dedicated to the company’s dreams. In a large group of people, she has found her place inside of it all.

“I have become more of an individual,” Mahri said.

Creating a close friendship with both founders, Mahri has grown to love them and the business. According to Mahri, they are now like her brothers, and she wants them to be successful.

The styles that Purple Plane Clothing brings to the table have sparked Mahri’s fashion interest. Working at a clothing store and being a “fashionista” has benefited her by working with a clothing company.

“Purple Plane is a collage of trends clumped together; every outfit looks different,” she said.

Her favorite piece made by Purple Plane is her custom-made navy blue sweatshirt with UA’s school colors and letters stitched on it.

“Fashion is art,” Mahri said. “It’s your way of expressing what you can put together.”

While modeling for Purple Plane, Mahri also plans on dancing professionally in the future. With her fashion-filled lifestyle, she still finds time to do what she loves while remaining a hard-working student. She recommends that “girls to take advantage of their futures and gain as many experiences as possible.”