A select group of University of Akron students is going back to high school as students of a different kind.

The Barberton Project, developed and nurtured by Dr. Hal Foster over the past 20 years, is a unique, real-world experience that allows UA students to act as academic mentors of a College Prep English class at Barberton High School.

Brittany LaCroix has been teaching for five years and has graciously allowed Foster and his students complete access to her classroom and her students for a semester. 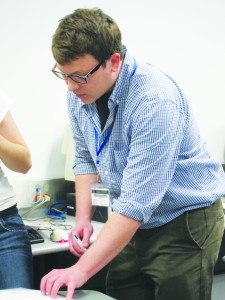 “Sometimes it is hard to give up control of my class over to the incoming college students,” LaCroix said. “But in other ways, it’s rewarding. I just want what’s best for my kids.”

Sometimes, this process is the equivalent of handing over a child over to a babysitter for the first time.

“We don’t really work with the college students before they take over,” LaCroix said.

Her trust in The University of Akron and in the English education students has allowed the program to flourish.

The project is built upon the idea of mentorship, with three academic segments. Within the nine weeks that UA students are there, the mentors will lead high school students through the process of writing a research paper, undertake a reading project and then complete the program with a Shakespeare unit.

“Almost all of my students have taken on a role which is a real responsibility, like a doctor or an airline pilot,” Foster said. “They have real students in front of them.”

According to Foster, this is his favorite part of the program

“It allows them to teach their kids to actually care about their education,” LaCroix said.

Each mentor brings with him or her an individual perspective and a desire to see change, whether that change is in the students they teach, the school district in which they teach, or a change within themselves.

UA education major Celeste Johnson said that she wants to go into education in order to see change.
“I originally wanted become a broadcaster,” Johnson said.

However, after volunteering for Boys and Girls Club, she had a change of heart and began to pursue a degree in education. Growing up in an urban area, she understands the demands of a lower-class student, such as family obligations and working while maintaining academic studies.

“I can relate with a lot of my kids,” Johnson said. “I know how hard it can be. I want to be the one who tells them that they can rise above their situation to achieve their goals.”

Johnson also hopes to continue her education and then achieve her ultimate goal of becoming an administrator because.

“I want to see a change in the way schools are run, and I feel confident that I can do that,” she said.

Coming from a military background, she has the discipline necessary to achieve those goals.

Crystal Kouns came into the Barberton Project with a completely different approach. She currently holds a degree in psychology, which she feels is valuable when understanding her kids.

“I’m not here to save the world, just the 5 percent of students who would otherwise be overlooked,” Kouns said.

She believes that students who are often deemed as outcasts or punks are smart kids who just need to find someone or something to relate to, which is why she wanted to go into English education. To her, literature completely changed the way she viewed life, and she strongly believes that the same can happen to students who are craving for some sort of connection.

In regards to the program itself, she brings to the forefront a valid point.

“When you’re being taught how to be a teacher, everything is by the book,” Kouns said. “However, once you are in the classroom, that all goes out the window. You have to be flexible.”

“They keep me current,” she said.

For Eric Heffinger, the Barberton Project offers not only a career change, but also an opportunity to do something much bigger than himself.

“Becoming a teacher was not my original plan,” Heffinger said. “It’s been a crazy path.”

At five years old, Heffinger was diagnosed with leukemia. After experiencing remission, he was diagnosed again at 15. He was forced to carry out his high school studies at home.

“I was very independent as a result of that. I taught myself a lot,” Heffinger said.

He had to fight to finish his degree, but with the assistance of his teachers, who were willing to work with him at home, he graduated and was able to attend Bowling Green University. He majored in film production, and after graduation he was employed as a market producer by NBC.

With the recent economy, the entire industry was downsized and he was let go. This became a pattern for the next few years. All the while, Heffinger worked as a substitute teacher.

It wasn’t until he was required to teach a Shakespeare unit that he had his “ah-ha” moment. Instead of floating back and forth between film production jobs, Heffinger decided he was ready for education to become his career.

“I really like being creative and showing off my work,” Heffinger said. “I can be a different kind of creative here.”

When Heffinger first introduced himself to the students at Barberton High School, he was completely open with his students. He presented himself with no barriers.

“The connection between the student and the teachers is really important,” said Heffinger. “Keeping them strong and trustworthy is the best thing I can do for them.”

With the students’ best interest in mind, Heffinger and the other mentors in the Barberton Project are required to be flexible with the changing times.

“Being educated on education has opened my eyes to the potential,” Heffinger said. “There needs to be a whole new breed of teachers that need to be politically and socially active to change the idea of what we are teaching our kids and how we go about doing that. I think there’s potential in our generation to do that.”

This is what makes the mentors in the Barberton Project so unique.

According to Foster, UA students are emotionally invested in their work. They are constantly working on improving their curriculums and teaching techniques, as well as methods of interacting with students in order to achieve the student-teacher relationships that prove to be so valuable to students and mentors alike.

The hands-on teaching program allows the mentors to learn about their own strengths and weaknesses, all the while encouraging confidence and enthusiasm in their students.

“I have seen students and college students cry on the last day because they have given gifts to each other,” Foster said. “They are not material gifts. This is a powerful way to teach. I have been deeply moved by this project.”