The “Emperor” comes to UA 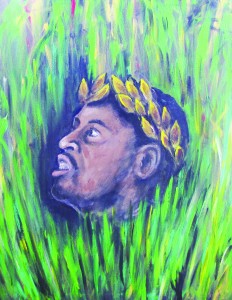 The production is directed by UA student Carol Eutsey, who has directed and starred in many productions in the Akron area.

The play revolves around the life of an African-American man named Brutus Jones who is imprisoned for murder and subsequently escapes to a remote island, where he usurps power as the emperor.

His life story is told in the form of flashbacks that haunt him as he flees from a constituency that has rebelled and is now seeking to murder him.

“The Emperor Jones” reflects a heady mix of realism and expressionism and was O’Neill’s first acclaimed play, and the one that established him in the canon of famous American playwrights.

The play first opened on Broadway in 1920 and was very successful, running for 204 performances.

“I love directing Eugene O’Neill because his directing intent is clear throughout the entire script,” Eutsey said. “This makes the director’s job a little easier because the cast has clear decisions as to the why factors for their stage of actions. The use of expressionism makes the production a lot of fun to re-create as well.”

According to Eutsey, “the co-star of the show is actually the beat of a tom-tom drum.”

The drum beats constantly throughout the play, underscoring the intensity of the action as it increases.

The play opens at Sandefur Theatre in Guzzetta Hall April 12 for a special preview show at 8 p.m. It will continue on April 13 at 8 p.m., and April 14 for a matinee show at 1 p.m. and an evening performance at 8 p.m. All performances are free of charge.