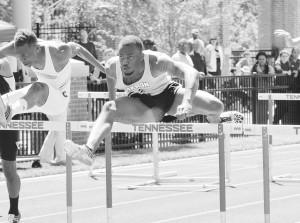 Freshman Alexis Cooks, junior Brittany Cheese, sophomore Alex Bowers and sophomore Brad Hough all competed well in their events, and landed among the best of the competition.

Hough had the best day of any athlete on the Zips squad. He came through with two victories for Akron, his first coming in the 1,500-meter. Hough won the race by more than two seconds and beat out 18 other racers. He posted a finish time of 3:49.61.

In his second victory, the 3,000-meter race, Hough beat his competition by less than a second, but came away with the win nonetheless at 8:44.88. Hough will continue to race in both events on the way to the MAC Championship.

Cooks competed in the discus throw and came through with a huge throw that listed with the best in school history. Cheese, who has been a strong runner for Head Coach Dennis Mitchell since she landed on campus, also came close to breaking a record, as she finished strongly in the women’s 100-meter hurdles. Bowers fought hard in the women’s 3,000-meter hurdles also, and came away with a good finish for the Zips. Finally, Brad Hough had the best day of them all, as he coasted to a 1,500-meter and 3,000-meter victory.

Cooks came into the competition hard, and because of it finished in fourth place in the discus. She beat out the fifth place finisher by almost a full meter. Cooks’ 14.08-meter third throw beat her other attempts by about a one-half of a meter. Cooks overcame three fouls that were recorded periodically throughout her tires.

Cheese has always been a tough competitor since her time in an Akron uniform. This year is no different, and she competed well at the Tennessee Challenge.

Cheese finished second in the 100-meter hurdles and finished just fractions of a second behind the first-place winner. Cheese just missed her record time (13.93) with her 13.94 time. She also took second place in the long jump, and will continue to compete in multiple events throughout the outdoor season.

Akron will continue their journey this weekend when they host their first outdoor event of the season. UA will host the Northeast Ohio Quad at Lee R. Jackson Field. The event will start at 3:30 p.m. on Friday and continue Saturday at 11 a.m.