While the tag line “May the odds be ever in your favor” certainly applies to the fight-to-the-death film, it may be better suited as a wish of good luck to all of the other films in theater that are having a difficult time kicking “The Hunger Games” out of the top box office spot.

“The Hunger Games” has been No. 1 at the box office for 4 weeks and has grossed over $21.5 million dollars, according to moviefone.com.

The film had a bigger opening weekend than all of the Harry Potter movies. It is obvious that people love “The Hunger Games,” but why?

Andreani said that she usually does not like movie series that are hyped up.

“I loved ‘Twilight’ before it became so popular,” she said. “‘The Hunger Games’ actually did live up to the hype.”

UA law student Nate Johnson said that the film was “way too overhyped. I thought it took a lot from [William Golding’s] Lord of the Files, and basically any movie about a corrupt dystopian future.”

UA senior Shaina Pearlman said that she has “high hopes” for “The Cabin in the Woods.”

“I heard it’s really scary and different from most other horror movies,” she said. “Joss Whedon [writer of ‘Buffy the Vampire Slayer’] was one of the writers, and he’s fantastic.”

The primary characters in“The Cabin in the Woods” are college students, so the film is sure to be promising among the college-age population.

Another film that is being highly buzzed about is not a new film at all.  “Titanic 3D” is doing well at the box office, breaking into the list of top 10 films.

The film was a huge box office success in 1997. According to the nytimes.com, the film grossed more than $600 million in theaters nationwide in 1997.

Many people wonder why anyone would go see a movie that has already been out in theaters before, one that a large number of people have seen at least once in their lifetime.

“I loved ‘Titanic 3D,’” said UA child development major Haylee Doran. “I mean, I’m a little biased because I’ve been obsessed with the boat since I was a little girl.”

A big question many may have is if “Titanic 3D” is worth the extra money that 3D movies cost. Are the visual effects really that much better?

According to Doran, the visual effects actually are better, and her experience of seeing them was great. But more than that, Doran believes that if you are a true “Titanic” fan, you will pay the extra bucks to see the film in 3D.

“I do think it’s worth seeing in 3D if you love the story of ‘Titanic,’” Doran said. “Titanic 3D” was right behind “The Cabin in the Woods” at the box office.

In addition to these highly talked about films, there are a number of other films in theaters right that are receiving positive attention. 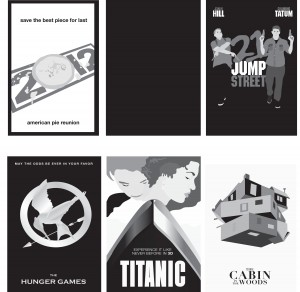 Both “American Reunion” ($10.7 million) and “The Three Stooges” ($17.1 million) have been greatly anticipated and are doing well at the box office. Both films have been in the top 10.

The romance film “The Lucky One” is sure to pull in some impressive numbers. The film is based off of a Nicholas Sparks novel and stars a very fit looking Zac Efron. This film will surely bring in the “girl’s night out” and “date night” audiences.

The comedy film “Think Like a Man” is also bound to do well. This film is based off the hit Steve Harvey book “Act Like a Lady, Think Like a Man.” The film has an all-star cast that includes Chris Brown, Kevin Hart, Taraji P. Henson and Gabrielle Union.

For those action fans out there, “The Avengers” is set for a May 4 theatrical release. Parts of the film were filmed on location in Cleveland. The film stars Robert Downey Jr., Chris Evans and Scarlett Johansson.

With films gaining popularity and rising higher and higher in the box office, and with the new upcoming releases, perhaps “The Hunger Games” will finally be knocked off its throne.

For right now, no matter what negative comments are being said about it, audience members, male and female, are flocking to see “The Hunger Games.” Whether you fancy it or not, “The Hunger Games” is most certainly the film of the moment.