Climate change is a fact 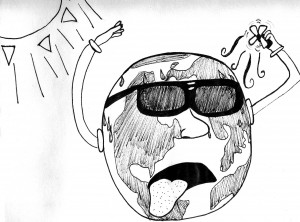 This is the third part in a series focused on the issue of science in education. To view the two previous articles, visit the opinion section of our website at www.buchtelite.com. The fourth and final article in the series will focus on the dangers of allowing decisions that require critical analysis and data collection to be influenced by opinion

The common theme that I have been perpetuating throughout this series is that science represents facts. Theories in science are useful explanations of facts that have the ability to make correct, or near correct, predictions.

Republicans nationwide are waging a war on sound scientific theories that they don’t agree with, with nothing more than money and political persuasion. In addition to targeting the theory of evolution, they have singled out climate change science as their second target.

Man-made global warming, however, is an unequivocal fact. How can we expect to use the atmosphere as a free dumping ground for greenhouse gas emissions, increase our power output over 30 years by approximately five watts per each meter of earth’s surface and release 130 times the amount of carbon dioxide into the atmosphere as volcanos do over the same period and not expect consequences of any kind?

Each of these facts has been provided by the National Oceanic and Atmospheric Administration and the Department of Energy.

One of the problems with the public misunderstanding of climate change is the media. The media often props the climate change discussion as an equal debate — a yes or a no. The fact is that climate science is not a debate because one side follows the scientific process while the other does not.

There is considerable work that is put into the reports of reputable scientific communities such as the International Panel on Climate Change or the National Oceanic and Atmospheric Administration. These reports generally take several years to write and refine, as they must go through stages, including data collection, several rounds of review and the reception of thousands of comments made by the hundreds of scientists involved before they are officially published.

Once they are public, the media grabs onto these reports and invites a few petroleum geology Ph.D.s, who usually represent a specific oil company or special interest group, to offer their opinion on the reports.

This leaves the general public to believe that this is an equal debate, but it is not. Some may believe this is fair and balanced, but it really is complete and utter distortion. These few special interest scientists never report on the credibility of the multiple sources it took to compile the original report.

The public, as well as politicians, are perfectly capable of figuring out what to do if they are given the facts of reality; however, they rarely do because the facts have been muddled by the fraudulent debate in which both sides are given equal credibility when one doesn’t even deserve it. One side has done the work, while the other has done nothing.

This argument can be equally applied to those who pose that climate change will lead to the end of the world. Claiming that climate change is not happening or that the world will end because of it are the least probable conclusions that can be drawn from the research. The problem that we should be working on together is the possible impacts of climate change over time. The speed at which the Arctic ice caps are melting, for example, has actually surpassed our predictions. The moral question we must ask ourselves is can we afford not to act?

We do have the ability to impact the world around us in a negative way, and we are doing so right now. All we can do is predict what will happen because of our impacts and see how well our predictions match the reality.

The downside to this fraudulent debate is that the public is led into believing that we must have more confidence and more evidence before we can decisively act. The problem with this is the longer the wait, the more irreversible damage we may do, the more tipping points we cross. What we all need to consider is risk management.

Most people have various types of insurance, such as fire or flooding insurance, even though the risk of having your house flooded or burnt is around one percent. We get insurance because we do not want to face the repercussions if that terrible event happens. What, then, is the problem with considering to do the same when it comes to climate change?

Man-made climate change is a factual part of science that must be taught within the classroom. Students need to know how system science works.  We do have the ability to understand complex systems and predict their patterns and future impacts. To deny climate science is to deny the understanding of complex systems, as well as the data and work of thousands of reputable scientists.

We have the right to our own opinions, and value judgments on what courses we must take in response to what we see happening around us; that is guaranteed by the Constitution. We do not, however, have the right to deny the facts because they do not coincide with our personal opinions.