This year marked the 79th annual Songfest for the Greek community. 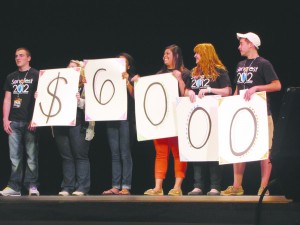 This year’s Songfest theme was Billboard Hits by the Zips. The goal behind this event is to promote Greek unity and philanthropic excellence. This year, the Songfest philanthropy was once again Camp Quality Ohio.

During the event, sororities and fraternities choreograph a song and dance number to music that matches the theme of the show.

A group of selected fraternity men and sorority women are chosen by their chapters to be a committee member. These committee members, along with the Songfest planning committee, spend months planning the event for the Greek Life community.

Camp Quality is a summer camp whose mission is to remind pediatric cancer patients of their memorable childhood experiences, as well as create new ones. Every child who attends is paired with a companion during the week who offers support and guidance.

Each chapter works to raise money as a part of Songfest participation. All of the proceeds go directly to Camp Quality Ohio.

This year, The University of Akron Greek community set a goal of $5,000 for the community raise.

On Sunday, it was announced that the Greek community exceeded its goal by raising $6,000.

The first and second acts each received loud applause from Greek chapters supporting the performances of their fellow brothers and sisters.

The curtains closed on the final act to prepare for the judges’ results. Each chapter had representatives placed in the first row to accept award.

Awards were given for a variety of categories, including best banner, best props and best costume, awarded to Phi Delta Theta.

Alpha Gamma Delta was recognized for the most alumni in attendance.

The best solo for fraternity and sorority went to Lambda Chi Alpha and Delta Gamma, respectively.

Awards are also given for the combined acts, fraternities and sororities.