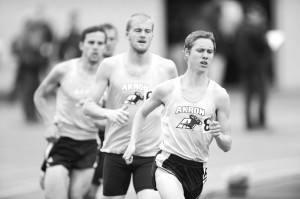 The University of Akron track and field teams took home a women’s third and men’s second place finish at the All-Ohio Championships hosted by Miami University (Ohio) over the weekend.

Akron faced off against Ohio State, Dayton, Cincinnati and Xavier, and the men’s team held a large lead heading into the final day of the meet.

Akron started the weekend off by clinching three events and taking a 22-point lead over second place Ashland. The Zips led the eventual winner, Ohio State, by 31 points after the first day.

The Zips are familiar with success and victory at the All-Ohio meet, and won by 85 points just a year ago.

Akron sophomore Brad Hough continued his domination in the 5,000-meter. Hough won by about 10 seconds in the weekend event, and adds to a string of victories he has enjoyed in the past month.

Last weekend, Hough came away with another victory in the event.

He also contributed in day two by producing the fourth best time in the 1,500-meter race in school history. He ran a 3.50.50 and beat his competition easily.

“Brad Hough came through as he has all season in the 5000 and 1500,” said Akron Head Coach Dennis Mitchell.

Another competition in which Akron has showed tremendous strength is the pole vault. Junior Joe Weesly, sophomore Shawn Light and senior Mike Uhle all impressed. Weesly came away with first in the event, while Uhle was able to pick up points for his team with a fifth-place finish.

Though Akron was unable to close the meet out, they did have an impressive day two. Senior Tyshaun Peoples won the 110 hurdles and finished in second place in the men’s long jump. He also participated in the 4×100 relay, in which his team placed third.

“After being injured all indoors, Tyshaun Peoples is coming through in the long jump, high hurdles and the 4 x 100 relay,” Mitchell said.

In the first day, the women’s team was quiet. The women had no athlete who finished better than eighth in any event, but was able to rally in the second day to finish with an impressive third.

Senior Katherine Lee once again led her team in the field events. Lee finished first in the long jump and fifth in the pole vault.

Teammate junior Brittany Cheese also had a big day. Cheese contributed in the field events by finishing second in the long jump, but also won the 110 hurdles in the track event.

Akron will compete at Relays Weekend next weekend.