The Lady Zips softball team split a pair of doubleheaders against two MAC rivals this weekend. The team dropped two close games to Western Michigan on Friday and beat Northern Illinois in a pair of games on Saturday and Sunday.

The Zips turned their weekend with a win against Northern Illinois (18-28, 6-10 MAC) Saturday afternoon 8-6 under rainy conditions. 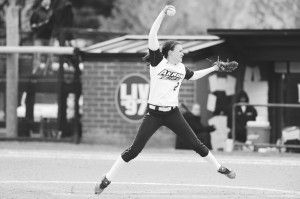 In the top of the first, the Huskies scored a run to go up 1-0, but would not keep it for long. The Zips went up 3-1 after Rachael Rattcliffe hit a three-run shot to right, her eighth of the year.  Brittany Mauer and Kellie Roudabush reached base later in the inning, but were stranded.

In the third, the teams traded runs and the Zips stayed on top by two with a score of 4-2.

In the bottom of the fourth, UA broke the game open after Nester and Alex Helfrich both reached base on errors. Alissa Birkhimer brough them home on a two-RBI double with one out to make the score 6-2 after four.

NIU chipped away at the lead in the next two innings, scoring two runs in the top of the fifth and sixth to tie the game at six apiece.

In the bottom of the sixth, Helfrich reached first on a bunt with one out. Birkhimer then hit her seventh home run of the year, a two-run shot to left to put the Zips up 8-6 for good.

Mauer was credited with the win from the circle. She gave up five earned runs (six total) on 13 hits, with six strikeouts and just one walk.

In game two on Sunday, the Zips topped off their first sweep of a MAC foe with a 12-6 win.

Allison Dorr was perfect on the day, going 4-4 with an RBI and a run scored against the Huskies.

The Zips added another run in the bottom of the second when Nester scored on a fielder’s choice to make the mark 4-0.

The Huskies threatened to erase the Zips’ lead when they scored two runs in the top of the third and had the bases loaded with one out. Mauer was able to get out of the jam by forcing a fly out to end the inning.

In the top of the fourth, the Huskies added two more runs to tie the game at four apiece. For the second consecutive inning, Mauer was able to get out of a bases loaded situation with minimal damage.

In the bottom of the inning, the Zips broke open the game, scoring five runs off of six hits.  An error committed by the Huskies kept the inning alive for the Zips.

In the bottom of the fifth, UA added a run to make the mark 10-4. The Huskies then matched that run in the top of the sixth with a solo-home run to close the gap.

In the bottom of the sixth Akron, added two insurance runs to make the score 12-6, while leaving the bases loaded to end the inning.

NIU added a run in the top of the seventh, but the attempt would not be enough, as the Zips completed the sweep.

“Offensively we got it done,” said Akron Associate Head Coach Julie Pratt after the game.

According to Akron Head Coach Julie Jones, if the team can put all three aspects of the game – pitching, hitting and defense – together then the team can win.

“The team is playing like a team and we need that,” Pratt said.

The Zips (17-27-1, 3-11 MAC) gave up two runs in the top of the first in game one against WMU (21-17, 7-5 MAC) to go down early Friday. They looked to get those runs back in the bottom of the inning with two of the first three batters reaching base, but the Broncos’ pitcher would strike out the side to end the inning.

The Zips then tied the game at two runs apiece when Keelia Nester drove in a run off a single and later scored on a single by Helfrich with two outs in the bottom of the second.

In the bottom of the third, the Zips had a chance to take the lead with another two-out rally, but Allison Dorr was thrown out attempting to steal third to end the inning.

Neither team would produce much offense until the top of the sixth inning, when WMU scored the eventual game-winning run to go up 3-2 for good.

Mauer (14-19) was credited for the loss from the circle, giving up three runs and five hits while striking out two and walking three.

In game two, the Broncos got the early lead again, scoring three runs in the first inning. The Zips committed three errors in the inning, and Mauer replaced starter Andrea Arney in the circle with the bases loaded to get the Zips out of the jam.

In the second inning, Arney re-entered and settled into the game.  She would retire nine of the next 11 batters while only giving up two hits during the next three innings.

Akron got back into the game in the bottom of the fourth with a three-run inning. The first two Zips would reach base and Helfrich eventually scored on a passed ball and throwing error by the Broncos’ catcher. Roudabush tied the game with her first home run of the season with a two-bagger.

In the sixth inning, both teams stranded runners and the game eventually went into extra innings with a score of 3-3.

With the bases loaded in the top of the eighth, the Broncos went up 4-3 on a groundout. They went on to score another run off a wild pitch by Birkhimer to make the score 5-3.

The Zips were unable to produce a run in the bottom of the inning and dropped the game 5-3.

Helfrich and Roudabush each went 2-4 to lead the team from the plate.

The Zips will hit the road for the last time this season when the travel to Eastern Michigan on Friday for a doubleheader. They will then have a two-game series on Saturday and Sunday against Central Michigan.