The Martin Center will host the final portion of the School of Communication Speech Contest today. The first-prize winner of this contest will walk away with $1,000 for the best problem-solution speech.

The five speakers competing in the final compet 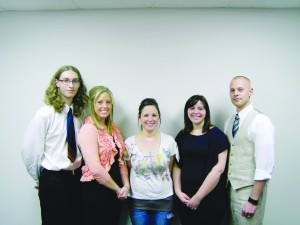 ition were selected as the best presenters from a preliminary speech contest held April 17. The preliminary contestants were chosen by Introduction to Public Speaking (IPS) and Effective Oral Communication (EOC) instructors.  Each contestant presented an issue and a solution, demonstrating the skills he or she had learned in speech courses.

Within the preliminary contest, there were about 110 students selected by faculty to compete.  Those competing in the first competition delivered their speech twice, once at 7 p.m. and again at 8:15 p.m.

To avoid bias, no student was judged by his or her own speech instructor or had the same judge for both rounds.

The winners of that round and the competitors in today’s competition are Louis Ray, Kristen Smith, Theresa Rios, Christina Comisso and Garrett Auckerman.

Bonnie Keiper, coordinator of the General Education Speech Program, has worked closely with this event, even having a student in the final five.

“We have a very talented group of students at The University of Akron who are very good speakers,” Keiper said.

Ray, a freshman, was selected by his instructor Joe Gains and will be speaking on the topic of “Civic Engagement in America.”

Smith, also a freshman, was selected by Andrea Mitchell and will be speaking about “Media Influences on Body Image.”

Rios is a sophomore who was selected for the contest by Bonnie Keiper and will be speaking on the topic of “Milk Does a Body Good, Right?”

Comisso is a freshman, selected by Heidi Kaminicki, who will be presenting her speech called “McDiabetes.”

Auckerman is a sophomore, chosen by his instructor Randy Yoder, who will be speaking about “Human Civility.”

This event is sponsored by Pearson Learning Solutions and is open to the public free of charge.

The Master of Ceremonies for the event is Dr. John Zipp, associate dean of Buchtel College of Arts and Sciences. Judges for the event are Christine Sabo, marketing director for the Akron Beacon Journal; Candance Campbell Jackson, vice president and chief of staff for UA President Louis Proenza; Tim Quine, director of communication services for FirstEnergy Solutions; Stan Piatt, Talk of Akron host for WNIR; and Jeff Goldman, vice president of Sales for Pearson Education.

The second-place prize winner will receive $750, third-place $500 and fourth-and fifth-place winners will both be awarded $250.