Science in a democracy: it shapes the foundation and the future of our country.

This is the final article in a series that has focused on science education and its importance in a democratic society. To view the previous articles or to submit comments, please visit the opinion section of our website at www.buchtelite.com.

Our country was founded on the principle that all men are created equal, where law is blind and that each individual’s opinion and feelings are, idealistically, held as equally valid and proper.

The Constitution outlines a process by which we can argue and make decisions based upon general consensus. Science itself acts in a very similar way, where each individual scientist is given the opportunity to represent his or her hypothesis and submit it to peers for debate. The crucial factor in whether a theory stands or falls is the data that supports it. 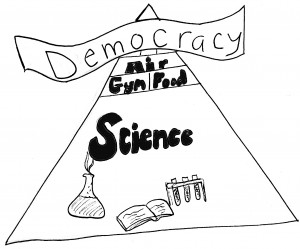 Never before in history has science been so important to our everyday lives. Literally everything around us is the product of science, and as we become increasingly reliant on science, it is important that we have a firm understanding of science. As we seek to understand increasingly complex systems in science, we require a greater foundation of general scientific understanding. Without it, we cannot become more than we are.

Some may believe that I am overstating the importance of science to our democratic society, but I argue that I am not. With the push for science education in our public schools, John F. Kennedy pushed our country to accomplish the unimaginable task of putting human beings on the moon in eight short years. We were able to do so because our country consulted science and hard-working experts in order to achieve the impossible. Because of determination and hard work, our country was able to succeed in at a seemingly impossible task.

I want you to imagine if we had allowed the facts and theories of science to be up for debate during the space race. Imagine if we had given equal time to people who had the opinion that the moon was made out of cheese or that the Earth was flat, and then allow those opinions to dominate our decision making process because it appeared that there was an unsettled debate of opinion. Though the protection of individual opinions is important within a democracy, we cannot afford to not separate the crackpots from the intelligible.

Within the scientific community, climate change and the theory of evolution are solid truths, even more solid than rocket physics was when we began the space program. Yet, as a society we deem it perfectly necessary to give equal credibility, when clearly one side does not deserve it.

Democracy thrives on the ability to make informed decisions; this is the reason Thomas Jefferson was such an advocate of public education. He, as well as many of the other founding fathers of the United States, believed that education was the cornerstone of democracy. Democracy can only succeed with an informed citizenry.

We cannot allow those who do not support good science to dominate our political debates and our legislation. We cannot make good decisions as a society if we do not have access to the facts. We cannot even make good assessments of the facts and data if we do not have the solid scientific background to understand them. How can our children make a decision for themselves on things such as the theory of evolution if they are never given the opportunity to understand the theory without the bias of a legislature who already opposes it?

The purpose of public education is to present our children with a secular education so that they may become individual, critical-thinking persons instead of pre-programmed, brainwashed computers. Science must be taught as science without the interference of government legislatures.

If the religious beliefs of individuals are so strong and so inherently true, why must they be legislated?  Are they so weak that they cannot stand third-party analysis and criticism that we must protect it under the law?  If they are so weak, do they deserve consideration at all?

We must stop this war on science and we must push our society to teach science properly. Until we do, there are many problems that will continue to go unsolved because the power to act is muddled by a few who decide to legislate decisions to us, as opposed to us making our own decisions.