The University of Akron baseball team traveled to Kalamazoo, Mich., for a three-game series against Western Michigan University this past weekend. 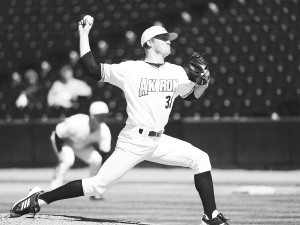 The teams played a doubleheader on Saturday because Friday’s game was postponed due to inclement weather.

The Zips won the first game by a score of 3-1. Senior Andrew Brown pitched his second-straight complete game, giving up just one run on nine hits. He has a 1.29 earned run average in five conference starts this season.

The second game of the doubleheader was much different from the first. Akron lost the second game to Western Michigan by a final score of 10-6. Sophomore Pat Dyer gave up seven runs in four and one-third innings.

The Zips were able to create some offense in the second game, scoring six runs on 17 hits. Sophomore Darius Washington went four for five with two runs batted in. Although the Zips lost the second game, Akron Head Coach Rick Rembielak was pleased to see more production out of the offense.

The two teams played the series finale on Sunday and the Zips came away with a 6-1 victory to take two out of three games from the Western Michigan Broncos. Senior starter Alex Loftin threw six innings while only giving up one run.

Rembielak was glad to see his team was able to produce at the plate and win the series on the road in Kalamazoo.

“I’m very proud of our hitters,” Rembielak said to gozips.com. “We swung well all weekend. It was maybe the best three games all year in regards to having very good swings, which produced some very hard hit balls.”

Akron will play the next four games at home. The Zips play Canisius today at Canal Park at 3 p.m. Akron will then begin a three-game weekend series on Friday against Central Michigan at Lee Jackson Field.