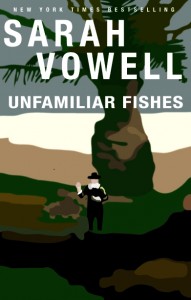 History, humor and book sales collided within the silos of the Quaker Square Ballroom on Tuesday evening as author Sarah Vowell spoke.

Brought to one of UA’s more interesting properties by the English department’s NEOMFA (Northeast Ohio Master’s in Fine Arts), Vowell read and ranted about many an historical topic, all the while giving her audience small tidbits of life lessons.

Vowell attempted to instill advice to the many students present about their career choices, discussing the “do what you love” motto that is always given to students.

“When you find the thing you love…you will have to do a lot of loathsome things…so buck up!” she said.

UA faculty member David Giffels introduced Vowell as a “charmingly passionate geek.” Giffels said he first heard the works of Vowell on a National Public Radio program. Vowell, with a very unique-sounding voice, leaves a memorable impression on listeners, Giffels stated, himself amongst them.

The radio show Giffels spoke of hearing Vowell through was NPR’s This American Life, where Vowell has been a contributing editor since 1996. Vowell has also worked as a journalist for multiple newspapers and magazines, some of which include Esquire, GQ, the Los Angeles Times, The Village Voice, Spin, The New York Times Book Review and McSweeney’s.

Apart from her journalistic work, Vowell is also a writer of comedic history in the nonfiction genre. Some of her books include, Radio On: A Listener’s Diary, Take the Cannoli: Stories From the New World, The Partly Cloudy Patriot, Assassination Vacation, Unfamiliar Fishes,  and The Wordy Shipmates. These works combine Vowell’s own adventures with historical facts that she learned along the way. The results are books full of humor and bizarre amounts of trivia.

Beginning with readings from Assassination Vacation, Vowell discussed the strange nature of visiting the locations of horrible situations, yet coming away with souvenirs.

Vowell began by asking those in the audience who had been to President McKinley’s tomb in the Canton area. When a shockingly small number of people raised their hand, Vowell told all the audience members to go with a shocked look on her face, especially as Vowell pointed out, that is where visitors can get a souvenir yoyo with a picture of the mausoleum on it.

Vowell described this region of Ohio as “assassination corridor,” since many of the assassinated presidents met their doom here.

Vowell did not stick solely to discussion of former presidents, however, and moved onto the topic of Salem.

Salem, Mass., the site of the witch trials that claimed the lives of many and left a stain on early American history, was described by Vowell as a “surprisingly nice weekend getaway.” The extreme contrasts present to one aware of the history of the place, Vowell spoke about the strange fascination modern Salem has with witches.

From the high school football team’s mascot to souvenir shot glasses, the tragedy of the place is played down to a comedic level. Vowell highlights this in her writing, all the while explaining the true history to give the reader the full blast of the humor of the whole situation.

Tragic situations of the past made to suit the modern American consumer can lead to a warped sense of humor. However, Vowell uses the absurdity for the powers of good and as a way to cheer herself up when in difficult situations.

Vowell stated that her personal motto is “could be worse.” When times are rough, Vowell said that instead of busting into tears, she thinks of Gallows Hill, the location those accused during the Salem Witch Trials were executed, and says to herself, “not as bad as swinging by the neck at Gallows Hill.”

Vowell said this was a good way to put things into perspective.

Another book Vowell selected to read from was Unfamiliar Fishes about the history of Hawaii.  A mix of vacation and history, Vowell discussed the thrusting of Western cultures onto the Hawaiian Islands and the cultural implications as seen in a plate lunch. Vowell discusses the mix matched culture through the mix of foods all combined onto one plate for a meal bought from a street cart.

The entomology of the Hawaiian words, many of which have multiple meanings, was another point of discussion during the reading.

“I thought Sarah Vowell was  really interesting and I enjoyed listening to her description of the writing process,” Geier said. Geier is an English minor, and has studied the writing process of creative nonfiction while at The University of Akron.

With many side notes and rants mid-sentence, Vowell’s reading brought history to life in a unique and hilarious way. Her books are for sale in the campus Barnes and Noble bookstore in the Student Union.