The Ingredients of Stan Hywet

Composed of several buildings built a century ago, several gardens and orchards, and recognized by the American Association of Museums, a visit to Stan Hywet is bound to be memorable.

The main attraction at Stan Hywet, the Manor House, was designed by architect Charles S. Schneider and built in 1912 by the co-founder of the Goodyear Tire and Rubber Company, Franklin “F.A.” Seiberling. According to Mark Gilles, an architect who works to restore and repair Stan Hywet, the house’s design was largely inspired by Seiberling’s wife, Gertrude. “F.A.’s wife took classes in architecture and interior design, and was a big part in designing the structure of the house and what went in it, furniture and all. So her husband may have been the moneymaker, but he was more interested in technology. Gertrude really was behind the Manor House’s appearance.”

The Manor House was built in a 16th- and 17th-century Tudor style that was popular in the 20th century. Spread out across its three floors are over 65 rooms, 23 fireplaces and 23 bathrooms. The house has been completely preserved, along with all of its furniture.

“Upon walking to the mansion, six different Tudor styles can be seen,” Gilles said. “Everything looks handmade and the stones in the house are purposely designed with track marks to give it that ‘worn’ look.”

The exterior and interior are equally breathtaking, giving visitors an accurate sense of what life and style was like back then.

In addition to its artistic appeal, the Manor House is also a technological curiosity.

“Art students, photographers, and engineers come to Stan Hywet often because the technology that was used back then by Seiberling was astonishingly futuristic for the age,” Gilles said. “It’s really interesting for people working in engineering. Architects from Stan Hywet are beginning to introduce green technology to the hall in order to cut down on environmental hazards.”

The Manor House isn’t all that one can visit. For instance, the Gate Lodge—the founding site of Alcoholics Anonymous—is available for touring. This well-preserved cottage, located near the entrance of the estate, was once home to supervisors and servants who worked for F.A. Seiberling.

All across the estate are gardens and orchards, such as the rose garden, the Corbin Conservatory and citrus orchard, the Japanese garden and the large service garden located right in the middle of it all. A new butterfly exhibit called “Beauty in Flight” has also opened and will continue running until mid-September. Tours and events (such as the Summer Concert Series and “Murder in the Mansion”) are held at Stan Hywet year-round, and the Manor House can be rented for special events such as weddings. 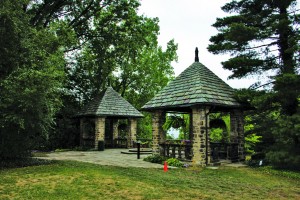