Few people are aware of the world-renowned Palliative Care Center located right around the corner at Akron Children’s Hospital.

The Haslinger Family Pediatric Palliative Care Center has been improving the lives of children for the past ten years.

Palliative care is designed to alleviate the suffering of the chronically ill. At the Haslinger Center, a team of physicians and nurses, specially trained in pediatrics, help families to deal with chronic illness and work to establish personal relationships with the children. 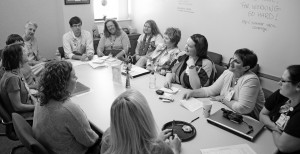 re Center, Dr. Sarah Friebert, and a few local volunteers from Akron, such as Francine Parr, J’aire Bell, Shane Wynn and Josh Gippin.

The concert was organized in ten different acts, each with a different performer. The event was structured as a competition between the performers, who raised money by donations to the Palliative Care Center. The performer who raised the most money, Dr. Friebert, won the competition. In the end, over $10,000 was raised in donations for patients at the Haslinger Center.

Francine Parr, a 16-year-old student at Firestone High School has had much experience with the performing arts and with Akron Children’s Hospital. The excitement for the concert was evident on her face.

“When I was asked to perform at the Palette of Care concert, I became immediately anxious,” Parr said. “Performing at a great place like the Civic Theatre, plus getting to meet all of the doctors who work at the center, was a lot to take in,” Parr said.

Parr said that being part of the concert gave her a sense of pride.

“I don’t care about winning,” she said. “Just being able to raise money for the kids at the Palliative Care Center is enough for me. Doing this means helping out the city of Akron and the children. It gives me a chance to give back for all that the hospital has done for me and my sister, who has been to the hospital many times for her injuries.”

Francine said that her and her sister feel a sense of loyalty to the Akron Children’s Hospital. Because they have been patients at the hospital they are personally connected.

Over the course of a few weeks, Parr was able to raise about $400 for the Haslinger Center.

The work that is being done at the Haslinger Center is monumental and deserves to be commemorated. Even though the doctors and nurses who work there banded together to celebrate the center’s 10th birthday, each and every day must be a colossal experience for them because they are the reason for so many changed lives.