In 1977, Jim Tressel walked the campus of The University of Akron as a master’s student pursuing a degree in education.

Thirty-five years later, Tressel has returned to The University of Akron — the birthplace of his teaching and coaching career — but is now wearing a different hat.

Tressel was named the vice president for strategic engagement on Feb. 2, when his position was formally announced by UA president Luis Proenza.

“I had the good fortune of going to school here back in the ‘70s, and it has changed so dramatically that one of my goals is to spread the good word of what transformation has occurred at The University of Akron,” Tressel said.

In his new role as vice president for strategic engagement, Tressel is trying to reach out to the students all across campus, as opposed to just focusing on the football players he coached.

“I used to be very secluded with about a hundred guys, in my former life, and now that I have 30,000 students, I might see a thousand different ones a day,” Tressel said. “I think they know that being here means a lot to me.”

Tressel has been heavily involved with student orientation programs this summer and is also actively working with any program related to student success.

One of Tressel’s goals is to increase enrollment and engagement among current students and alumni.

“We want to reach out to our current students and alumni to get more involved,” Tressel said. “We have a lot to sell here, and we really believe that if people come back to campus to see it and feel the people, then we will have a good chance to help plenty of students.”

In hopes of increasing enrollment and student engagement, Tressel wants to “engage our current students and alumni to help us, maybe even more than they have in the past.”

The University of Akron has a lot to offer prospective students, current students and even alumni, Tressel said.

“One of our biggest strengths is the people we turn out, the loyalty they have and the impact that they can make,” he said. “One of the strengths of the university is, because of its loyalty to the region, we have a resulting economic impact on the region. We turn out innovators, excellent workers, and people who can be difference-makers — and a good bit of them stay working in the footprint of the nine- 10-county area.”

Being mindful of students’ current economic hardship, Tressel encourages students to remember the importance of a college degree and try to steer the course.

“My advice would be that A, it is worth it, but B, you have to be as thrifty as you can,” he said. “You have to invest it in yourself, so later on you will be able to reap the benefits. And you’ve got to get glued in on what you are interested in or not interested in.”

Tressel said that this will be a time that students will have to sacrifice.

“Do all that you can do to put yourself in a situation where you don’t spend as much money as maybe some do,” he said.

Although the job market can be difficult for recent college graduates, Tressel said it is not impossible.

“Your attitude will be the key to your future,” he said. “A person with a strong attitude might get the door slammed in their face 15 times, but they keep coming back, and people can see that persistence in them.”

With the new school year approaching, Tressel is anxiously anticipating the start of the fall sports season.

“I told the Zips volleyball team that I wrote their schedule down on my calendar,” Tressel said. “I enjoy watching student athletes, and if you get to know them a little bit, then you really like watching them. I absolutely will be at as many games as I can.”

He also gives his support to the Zips football team.

“The advice I gave to every team that I have coached is that you have to stay focused on what is going on right now, this practice. If you can get better, this practice will serve you for the next practice, and that will serve you for the next game,” he said. “If you sit around and think, ‘OK, it’s August now and I wonder what our record will be in November,’ well, it doesn’t really matter what you are wondering. You have to be thinking about ‘what can I do today.’” 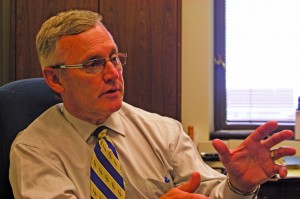 Tressel said that looking at things on a practice-to-practice basis can be difficult for teams, because they have a 12-game season, and everyone always wonders what their record will be.

“They have to work on just getting a little bit better and a little bit better, and before you know it, they will be in every game and valiant to the end,” he said. “The true reality, whether it is in life or athletics, is you work like crazy to get there, and everyone else is working like crazy to knock you out of there. It’s competitive, and that is why you have to work so hard on focusing on what is going on right now.”