As a new school year starts, students look for ways to get involved around campus. Some students take up sports, others get involved with sororities or fraternities, and some decide to join religious groups. 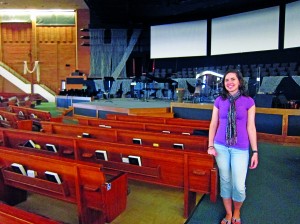 With so many different students come many different religions and belief systems. Student organizations work with students of faith, keeping their focus on their beliefs, while spreading those beliefs around campus to other students.

But how do these religious and spiritual groups affect the students while they are on campus?

According to Nicole Jacobs, 22, being involved with a religious group that shares her beliefs definitely has a positive effect. Jacobs was raised in a Christian household and has very strong Christian beliefs. Since her freshman year, she has been a member of Campus Focus, a group of students that come together to worship and learn more about the Christian faith. She said that her experience in the group changed her life.

Jacobs said that when she first started college, she became involved with groups that weren’t exactly what she was looking for.

“They weren’t the best influence,” Jacobs said. “I was going to all of these parties and stuff, but Campus Focus, they didn’t care about that. They just wanted to help.”

For the past three and a half years, she has participated in group activities with Campus Focus, including small group studies and weekend trips. She said having support from people who share the same beliefs changed her life. She encourages others to get involved in different religious groups around campus and spread their beliefs.

“We are called to spread God’s word to the people that haven’t yet heard it, so we have to make sure that we don’t only spend time with people of the same religion as us,” said Jacobs.

Dr. Paul Levy, chair and professor in the psychology department, also said that being involved could be beneficial for students. Levy said that students involved in any group across campus could have a positive experience because they are involved with people who are interested in the same things or have the same beliefs.

“I think it’s important that people feel comfortable and supported; groups that share beliefs can help folks in that regard,” Levy said.

Levy also said, however, that religious and spiritual groups could have a negative effect on students. He says that when so many people gather together and share the same beliefs or interests, they risk losing their individuality.

“The potential problem with any group like this … is that you run the risk of the groups becoming populated with people who think the same about most things,” Levy said. “Because of that, the individuals can lose their individuality and the group becomes more important than the individuals in
the group.”

Levy also said that this isn’t just a problem within religious groups.

“It’s a potential problem with any homogeneous group in which the individuals become so much alike that they can lose the ability to think for themselves or to consider other ideas, attitudes, and viewpoints,” he said.

Jeneen Sawalma, 20, said that joining a group with students of the same belief as her is not necessary. Just like Jacobs, Sawalma has grown up in a very religious household, but her family practices the Islamic faith. Unlike Jacobs, she is not involved in a club devoted to helping students grow in their Islamic faith.

“I’m friends with people of my culture here, so I don’t think it’s necessary to join a club,” she said.

Sawalma also goes on to say that she doesn’t want to have to sign up for a group to have religious beliefs or to be included
in her religion.

“I don’t like the idea of joining something that I’m already a part of,” she said. “I don’t need to officially join something.”

When asked if she thought joining other groups around campus was different, she said yes, explaining that with religion, you are already part of a group, such as a church congregation.

“It’s cool and fun, but not something you need to have a good time at school,” she said.

With over 250 student organizations on campus, there is something for every student that enrolls. For those students who have religious beliefs or are searching for something to believe in, there are many organizations to look into with beliefs ranging from Christianity to Judaism.

“I think faith groups can be very beneficial for students in terms of support and expanding people’s beliefs and values,” Levy said.