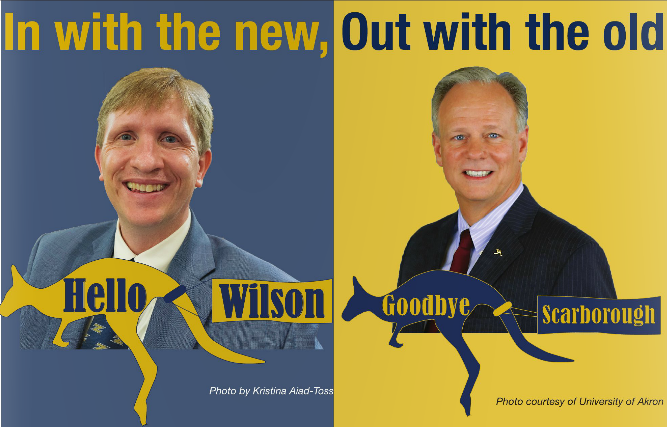 In with the new

The University of Akron Board of Trustees named Matthew Wilson, former dean of UA’s law school, interim president of the University on July 11, after former president Scott Scarborough resigned in May. In an interview with the Buchtelite two weeks ago, Wilson gave his view on the actions of the past 18 months and expressed his opinions moving forward.

Can you name some of your accomplishments as dean of the law school?

As I was coming in enrollment was down considerably, the facilities were old and outdated, a lot of the great things about the law school weren’t featured, the marketing had some things to be desired, we needed more hands-on practical training, and I thought there was room to grow globally.

First, I wanted to invest in students and give them financial certainty, so I changed the scholarship system…to: as long as you stay in school, your scholarship continue[s] throughout. Another thing was [funding renovations]. One of the great things about them was that there was no money borrowed to do a $21 million renovation. It’s completely paid for by private donations and savings.

We added a bunch of international programs. Our enrollment jumped by 30 percent and this year our applications are up by 25 percent. We rejected twice as many students as we did last year and our class is going to be even bigger.

What did the previous administration do wrong and what did it do right?

My focus is on looking forward and not back. My perspective is facing the challenges I have now and moving forward. We need to find ways to repair relationships and rebuild bridges and do the same things that I did with the law school campus-wide. What I’m doing is listening to folks. I’m putting out invitations to faculty, administration and staff to try and get their feedback. The good thing about having me here is I’m not coming in with an agenda beyond: how do I best serve the students and reconstruct relationships? I’m not coming in with a new slogan or motto. I tell people my slogan is ‘The University of Akron.’

Was the community and campus response reasonable or justified? Or did it only make the situation and UA’s reputation worse?

I think, without reflecting on the past, the take-away lesson from all this is that if there was ever any doubt about how the community sees The University of Akron, I think that doubt has been resolved. What it showed is that people truly do care.

It’s my hope going forward that what happened over the past 18 months is now behind us and the folks that expressed their opinions and were actively engaged will come together and support the University in this time of healing.

What are your top priorities for UA as interim president?

Students. That’s really what I’m about – trying to find ways to guide, to lead, to serve, and to inspire. It’s a privilege and an honor to work with [them] and share my experience and insights. The other part is figuring out how to support our faculty and staff who might have felt forgotten the past couple of years.

I want to assist students, help faculty and staff do their jobs, go out into the community and remind them of the greatness of UA so we can get more students, and bring more scholarship dollars into the University.

Can you give us an overview of the financial situation of the University?

The reality of the situation is that when you have an enrollment drop and the University is dependent on the tuition and state support, there’s always going to be a financial fallout and ramifications from that. In terms of maintenance and different things like that, right now with where we are, we are being very conservative.

In the five and a half weeks that I have been in this office, we are seeing an uptick in donations. There is also a $20 million dollar “Making a Difference. Moving Forward.” scholarship campaign underway. We have another scholarship coming that will be announced in October.

On July 11 when I was named interim president, comparing this year to last year, the overall enrollment was down by about 12.5 percent. Today, the enrollment is down 7.3 percent. The fact that there’s been a five point difference — in terms of improving — I’m encouraged by that.

What do you see UA’s future as, in regard to:

Tenured vs. full-time vs. part-time faculty

There are many benefits to having tenured full-time faculty that are able to devote significant time to the students. At the time, it’s good to have part-time faculty who have practical experience also. What the proper mix is, I don’t have a formula or an agenda. I think it’s very important to work with faculty and figure out — within the budgetary constraints — what can we do and what can’t we do.

Outsourcing really depends on the quality of the service that is being provided to the students and the cost and what it is. If we’re talking about food, like Aramark for dining services, it comes down to if students are getting the best service and how much it is costing. As we move forward, I can tell you on the recruiting side I would rather have internal folks who can provide face-to-face service and individualized approaches. But there might be some areas out there that could be external if it was better for students.

Online education is something that the faculty should decide. I don’t think there is any substitute for face-to-face contact. Does that mean that every single class should be in the classroom? Not necessarily. There are benefits to doing online education, but I think there needs to be a good mix. For example, my international business class I have been teaching is in-person, but it’s also streamed to South Korea. Using the internet, students can do simulated negotiations with law students from there. The professors and the administrators need to determine what works best for the students on a case-by-case basis. It shouldn’t be something that I should decide solely.

I think they need to be telling the story of The University of Akron. Part of my email to students will ask them to tell me why [they] are here and why UA has been great for [them], and we can tell that to folks who aren’t here and show them all the benefits. It’s going to be about finding and telling those stories. It’s not going to be based on a tagline.

Wilson has been at The University of Akron since 2014. He received two undergraduate degrees in political science and Asian studies at the University of Utah, and continued to law school at Temple University. Wilson has had teaching, legal, and business experience working in the United States and internationally in Japan, South Korea, the Philippines, and the U.S. Commonwealth of the Northern Mariana Islands. His interest in travel and other countries began when he volunteered to do missionary work for the Church of Jesus Christ of Latter-day Saints and was assigned to travel to northern Japan. After two years of working abroad, Wilson developed a passion for travel and said it gave him ”greater respect of others and the ability to view things differently.” While studying in Utah, he met his wife and moved to Japan with her, where he worked toward a career in international business. Today, Wilson has four children and two grandchildren.

Throughout his time in Japan, Wilson served as a translator for SONY, lobbied to government groups, worked jury trials, trained criminal defense attorneys, spoke at large events, and even appeared as a legal expert on primetime Japanese television. Wilson is fluent in Japanese and has published in the language in a trial advocacy book. One of Wilson’s pastimes is sports, especially intramural basketball, which he played when he taught at the University of Wyoming. Wilson says his favorite thing about UA is the people and that is why he chose to work here.

Out with the old

Over the summer, Scott Scarborough ended a short but controversial tenure as The University of Akron’s president.

The Board of Trustees, the governing body of the University, announced Scarborough’s resignation on its May 31 board meeting.

“The Board is charged with ensuring the effective governance, leadership and management of the University and, along with Dr. Scarborough, determined that new leadership is needed for the University to move forward and achieve sustained success in the future,” former board Chairman Jonathan Pavloff said.

Scarborough was hired in July 2014 to address declining enrollment and financial problems, including what the Board called a $40 million budget problem. He left after a year of unpopular decisions, such as rebranding the University as “Ohio’s Polytechnic University,” cutting the baseball team, eliminating 215 positions, and raising course fees during a statewide tuition freeze.

Scarborough’s critics — who protested vocally outside every Board meeting —  said that he and his administration lacked transparency and did not value shared governance (sharing power between the administration and faculty).

The administration’s approval plummeted in February, when the university’s Faculty Senate passed 50-2 a vote of no-confidence in Scarborough. The undergraduate and graduate student governments released surveys that showed disapproval ratings as high as 61 percent among students.

In the last six months of Scarborough’s presidency, local business leaders ran an ad campaign in the Akron Beacon Journal urging the community to give changes at UA “an opportunity to succeed.”

In response, a group called Advocates for the University of Akron launched its own campaign expressing concern at the direction Scarborough was taking the University. Its ads featured signatures from concerned students, alumni, donors, and community members.

Scarborough was replaced on July 11 when the Board named law school Dean Matthew Wilson as UA’s interim president. He will serve for an 18-month term while the Board selects a permanent candidate.

Meanwhile, Scarborough has joined the faculty as a professor in the business college. He is teaching two courses on strategic management and health care this semester.

In the wake of Scarborough’s departure, the University has rolled back many of the former administration’s changes. UA’s website will no longer feature the polytechnic tagline. It will not renew its contract with TrustNavigator, a company to which the University paid $800,000 to hire “success coaches,” which some criticized as unnecessary. The University restored “Akron” to the school’s marching band uniforms, which was replaced by the letter Z during a marketing campaign. In addition, the University reopened EJ Thomas’ box office, which had been closed in the 2014 summer during staff layoffs.

Additionally, the positions of former Vice President of Advancement Larry Burns and Dean of the College of Science and Applied Technology Todd Rickel – both hired based on recommendations from Scarborough – were terminated.

The Buchtelite • Copyright 2021 • FLEX WordPress Theme by SNO • Log in